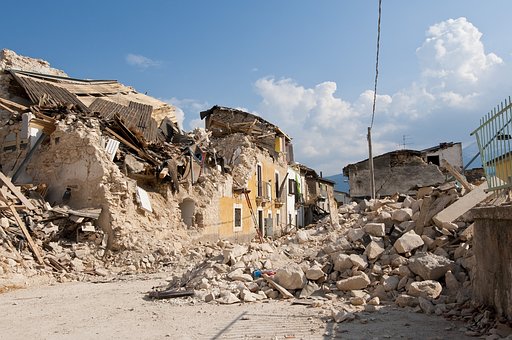 Earthquakes can happen anytime and without warning. Did you know that earthquakes that occur near the surface of the earth are more damaging than those that happen deep inside the earth’s crust? Or the HYPOCENTER is where the vibration actually happens in the earth, and the point directly above the earthquake’s focus on the surface is called the EPICENTER? Being educated about an earthquake may one day save your life, since knowing the language and properties of an earthquake can help you be better prepared if perchance you were ever to maintain one. Following are three basic components that may help improve your understanding of, and potentially help you escape the destruction of, an earthquake.

1. PLATE BOUNDARIES. The earth’s crust is broken up into large moving plates known as TECTONIC PLATES. The biggest is the Pacific Plate that encircles the Pacific Ocean. It’s known as the RING OF FIRE and includes the majority (more than 75%) of volcanic eruptions. The Ring of Fire isn’t actually a complete ring, only forming a horseshoe shape starting with the Tonga-Kormadec Trench that lies northeast of the New Zealand islands and wrapping around to the Peru-Chili Trench in South America and the South Sandwich Trench just east of the South Sandwich Islands. The earth’s plates are always moving, bumping into each other. Whenever these plates move towards each other with enough pressure, and slide past one another, an earthquake occurs.

2. MAGNITUDE. The magnitude is the way the power or intensity of an earthquake is measured based on the movement recorded by an earthquake-detecting tool known as a SEISMOGRAPH. The higher the magnitude, the more intense an earthquake is. For instance, an earthquake with a magnitude of 8.1 will be much bigger and, therefore, more damaging than one measuring at 2.1. The size of an earthquake can vary, depending on many things including the geography and the thickness of the quake. Usually a large earthquake also produces many smaller earthquakes after the larger sequence. The bigger an earthquake steps, the more aftershocks can be generated and can linger for longer periods of time.

3. INJURY. The harm that may come from an earthquake is often not from the initial earthquake itself but from man-made and natural structures which can collapse on people during the shaking. If you’re inside a building, get under a desk or table and shield your head from any falling debris. You might even stand against an interior wall for protection. Avoid exterior walls, windows, anything including glass, fireplaces, and heavy furniture or appliances. If you’re driving, pull to the side of the street, from traffic, and stop. Don’t park under bridges or overpasses, and prevent trees, power lines, and any other potential hazards. If you’re in the mountains, beware of the potential for a landslide. If you’re near an ocean, you might be in danger of a tsunami and should get to higher ground.

Earthquakes happen on a daily basis, yet the majority of them are rarely felt since they are so small. They can’t yet be predicted, which makes them even more deadly in the event of larger earthquakes. If you live in an earthquake zone, where earthquakes occur often, it is a good idea to find out more and be ready in case you were ever to encounter one. It may be the difference between trauma or even survival. For more questions check out Hallandale Beach Wildlife Removal